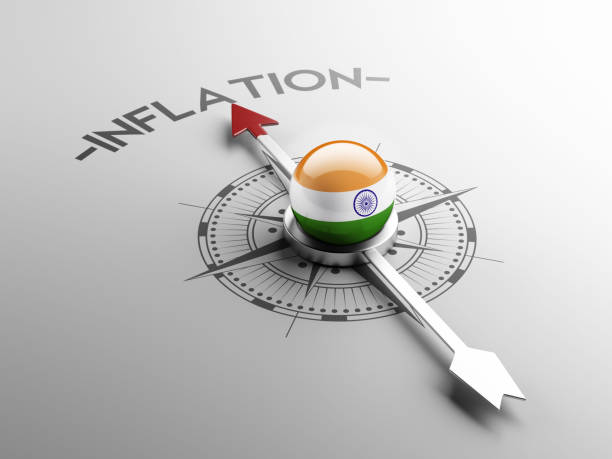 In the world of economics, inflation refers to the increase in the prices of goods and services in an economy. A rise in prices, expressed as a percentage, means that a unit of currency effectively buys less than it did in earlier periods. Therefore, over time inflation can be translated as the decline of purchasing power. In contrast to inflation, deflation occurs when prices decline and purchasing power increases. The common measure of inflation is known as the inflation rate, and it's the annualized percentage change in a price index. Since prices don't all increase at the same rate, the consumer price index (CPI) is frequently used for this purpose.

In this blog, Fintra will enlighten you on the subject of inflation by talking about the following topics:

What is Inflation and its Effects?

Over time it can be easy to measure the price changes of individual products, but human needs go beyond just one or two products. Individuals require a huge, diversified set of products along with a host of services for leading a comfortable life. The commodities include food grains, metal, fuel, utilities like electricity and transportation, and services like health care, entertainment, and labour. Thus, inflation strives to measure the overall impact of price changes for a diversified set of products and services over time. Even a surge in the demand for services and products can cause inflation because consumers are willing to pay a higher price for the product.

Throughout an economy, once inflation becomes prevalent, the expectation of further inflation tends to be a major concern in the consciousness of consumers and businesses alike. As prices rise, one unit of money buys fewer goods and services. The loss of purchasing power gradually affects the cost of living for the common public, ultimately leading to a deceleration in economic growth. In fact, as inflation erodes a consumer's purchasing power, it can also interfere with the ability to retire. According to economists, sustained inflation transpires as a nation's money supply growth outpaces economic growth. 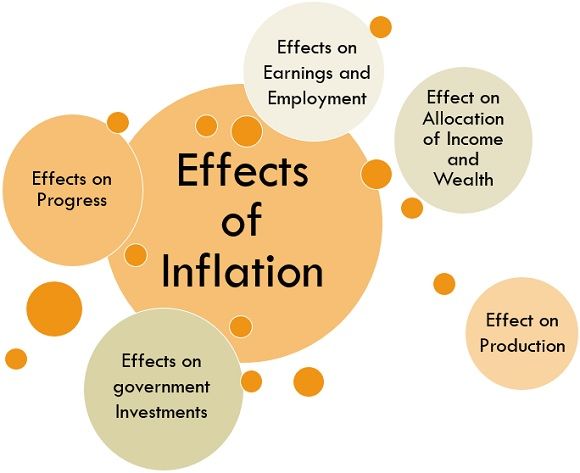 Inflation sometimes is classified into three types: demand-pull inflation, cost-push inflation, and built-in inflation. Along with the consumer price index (CPI), the other most commonly used inflation index is the Wholesale Price Index. Inflation can be viewed positively or negatively, it depends on the viewpoint of each individual and the rate of change. Individuals with tangible assets such as property or stocked commodities may get delighted to see some inflation because that raises the value of their assets.

Thus, to combat and monitor inflation, the monetary authorities such as the central bank are given the authority to undertake the necessary steps for managing the money supply and credit in order to keep inflation within permissible limits and keep India's economy running smoothly. Do bear in mind that monetarism is a famous theory as it profoundly explains the connection between inflation and the money supply of an economy. As the money supply rapidly increases, the value of money falls, contributing to rapidly rising prices.

Although inflation has its negative impacts, it's believed to a certain level that inflation is required because it ensures expenditure is promoted and accumulated money through savings is demotivated. Since money generally loses its value after a certain period of time, it is vital and a good decision for people to invest the money. By investing, it ensures the economic growth of a nation.

Who measures Inflation in India?

How is the Inflation Measured?

In India, there are few metrics used to measure the inflation rate. The three main metrics are Producer Price Index (PPI), Wholesale Price Index (WPI ), and Consumer Price Index (CPI). The CPI calculates the difference in the price for a basket of commodities and services like food, medical care, education, electronics, recreation, and so on that Indian consumers purchase for use. The goods or services that are sold by businesses to smaller businesses for selling further are measured by the WPI. Another measure of inflation is the PPI, which reports the price changes which affect domestic producers. PPI measures prices for farm products such as meats and grains, fuel, chemical products, and metals.

Depending on the selected set of goods and services used, there are numerous types of baskets of goods that are calculated and tracked as price indexes. As said above, the most commonly used price indexes are Producer Price Index (PPI), Consumer Price Index (CPI) and Wholesale Price Index (WPI). Following are some insights about these indexes:

The Consumer Price Index (CPI): In short, CPI is a measure that examines the weighted average of the prices for the goods and services which are primary consumer needs. They include transportation, food, and medical care. CPI is calculated by taking the price changes of each item in the predetermined goods and averaging them based on their relative weight. Then, the prices in consideration are the retail prices of the item, and they're available for purchase by the individual citizens. It's these changes in the CPI that are used to assess the price changes that are associated with the cost of living. Thus, CPI is one of the frequently used statistics for identifying periods of inflation or deflation.

The Wholesale Price Index (WPI): WPI, the other popular measure of inflation, measures and tracks the changes in the price of goods in the phases before the retail level. WPI items vary from one nation to another, but they primarily include items at the producer or wholesale level. For example, it may include cotton prices for cotton yarn, raw cotton, cotton gray goods, and cotton clothing. Numerous organizations and countries use WPI, but some countries use a similar variant known as the Producer Price Index (PPI).

The Producer Price Index (PPI): PPI is a family of indexes measuring the average change in selling prices received by the domestic producers of intermediate goods and services over time. In other words, PPI measures the price changes from the viewpoint of a seller and differs from the CPI, which measures the price changes from the viewpoint of the buyer. In all variants, to a certain extent, there could be a possibility that a rise in the cost of one component, say oil, may cancel out the price decline in another, say wheat.

Overall, each index denotes the average weighted price change for the given components that may apply overall in the economy, sector, or commodity level. 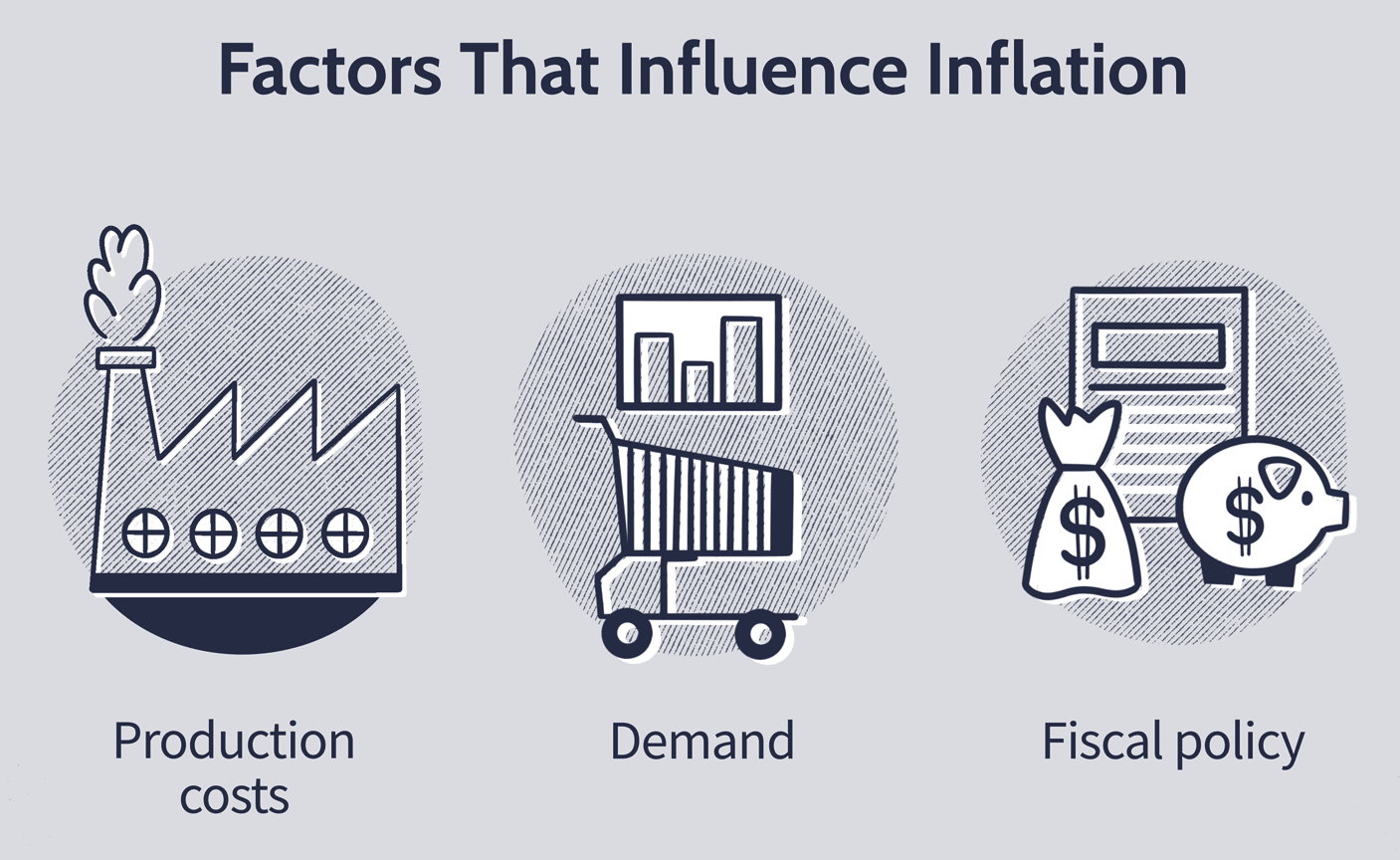 What are the Causes of Inflation?

Experts claim that the primary causes of inflation or the chief reasons for the increase in prices in India are as follows: 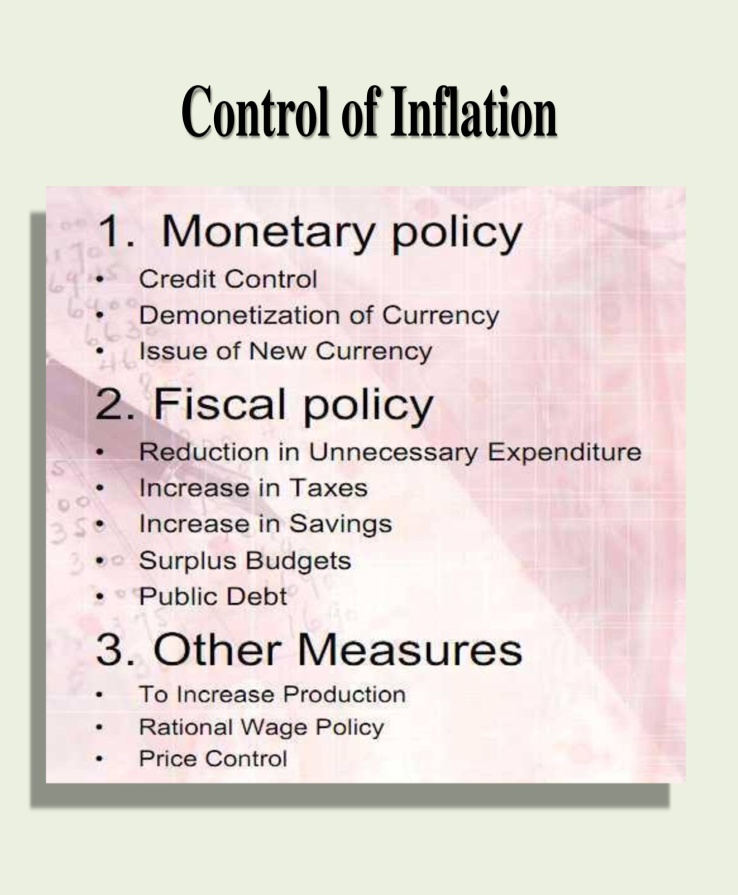 In a period where there's rapid economic growth, demand could be growing faster in an economy than its capacity to fulfil it. This leads to inflationary pressures as firms respond to the shortages by putting up the price. Experts may term this demand-pull inflation. In response to inflation, the Central Bank may plan to increase interest rates for the following reasons:

For these reasons, higher interest rates appear to be quite effective in slowing down consumers' investment and spending, leading to lower rates of economic growth. As economic growth slows down, even inflation tends to slow down as well.

To reduce inflation, the government may also increase taxes such as income tax and VAT and cut spending. Following are the reasons why the government does this act:

However, since raising taxes to lower inflation is likely to be politically disfavored, the fiscal policy for this reason is rarely used to reduce inflation. 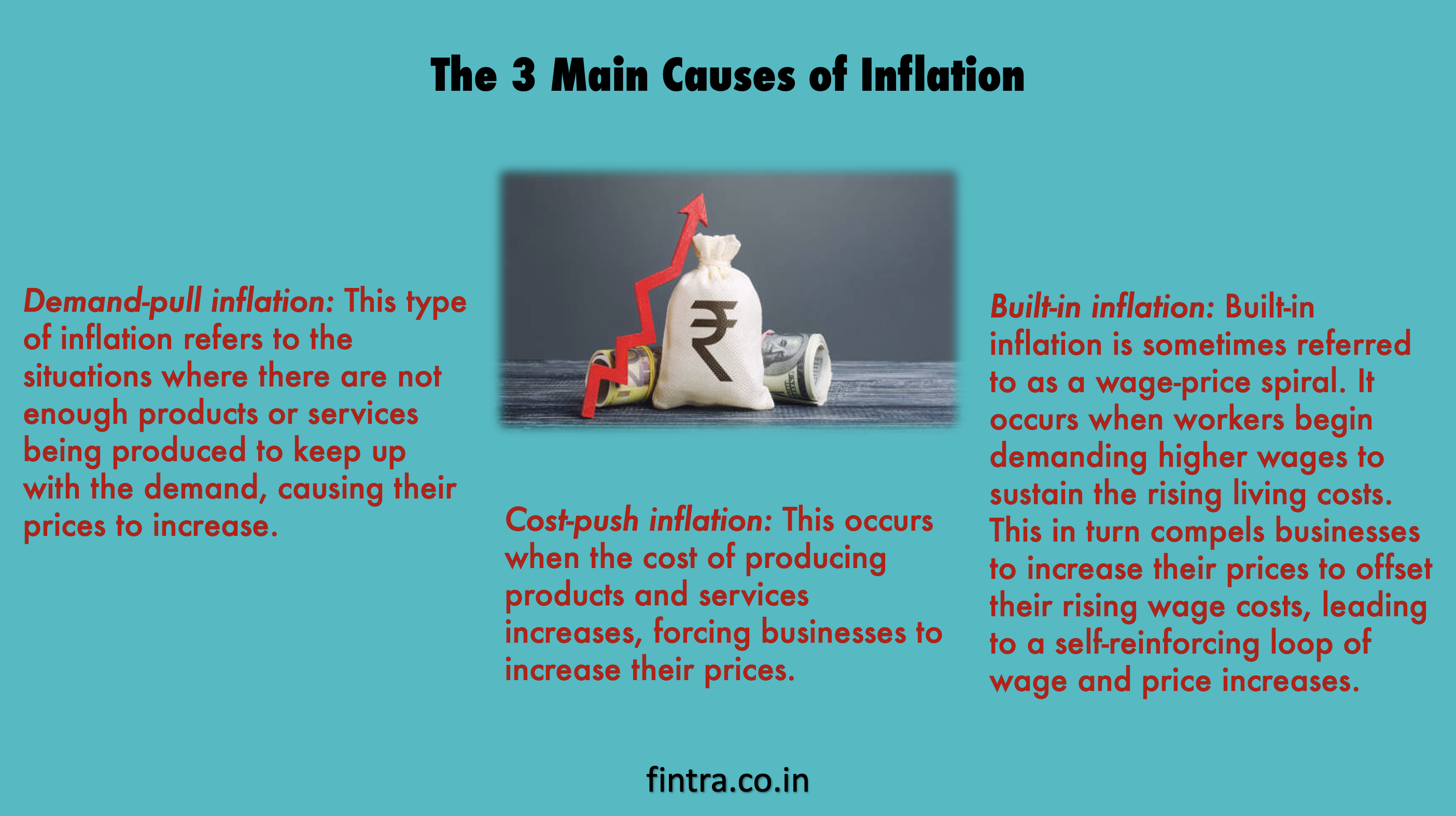 Who Benefits From Inflation?

Unfortunately, consumers receive little benefits from inflation, however. Investors get delighted and enjoy the boosts if they own assets in markets. For example, individuals who have invested in energy companies can see a rise in their stock prices if energy prices are rising. Few firms reap the rewards of inflation when they charge more for their products, resulting in higher demand for their goods. For example, suppose the economy is performing well and if the housing demand is high, the home-building companies may charge higher prices for selling homes.

In other words, inflation can sometimes provide businesses with the opportunity of gaining pricing power and increase in their profit margins. If profit margins are on the rising side, it means the prices, which companies charge for their items, are rising at a quicker rate than increases in production costs.

Also, business owners will sometimes intentionally withhold supplies from the market, letting prices rise to a favourable level. However, firms may also get hurt by inflation if it's the result of a surge in production costs. Firms stand at risk when they're unable to pass on the higher costs to consumers via higher prices. For example, if foreign competition is unaffected by the production cost increases, their prices wouldn't need to rise. As a result, Indian firms may have to take in higher production costs, otherwise, they'll be at the risk of losing their customers to foreign-based companies.

In general, everyone perceives inflation differently as it depends upon the kind of assets each individual possess. For those who've investments in real estate or stocked commodities, inflation will make the prices of their assets set for a hike. Those who possess cash can be adversely affected by inflation because the value of their cash gets gradually eroded.

Thus, we can conclude that too much inflation can be deemed bad for an economy, and too little inflation can also be considered harmful. Various economists advocate that a middle-ground of low to moderate inflation of at least 2% per year would be preferable to make a nation's economy run smoothly. 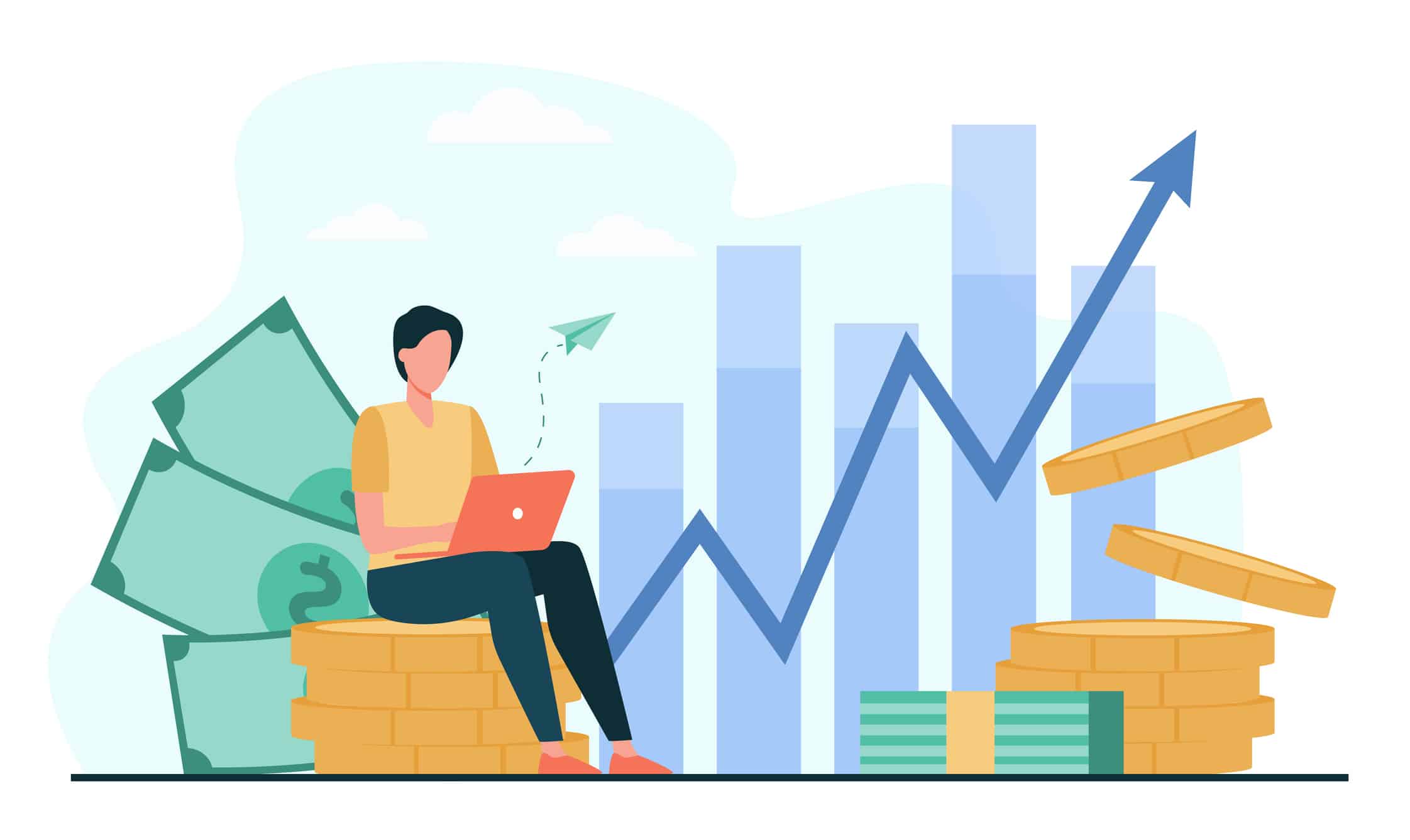